You are here: Home1 / Ratha-Yatra 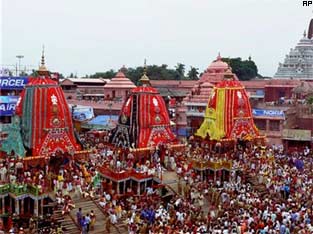 val of Lord Jagannath is held on’ AshadhaSukla Dwitiya’ -i.e. the 2nd day of the bright fort-night of Ashadha (June- July) every year.This festival is popularly known as Ratha Yatra, Gundicha Yatra and also Ghosha Yatra. On the Car Festival day, the deities are taken out of the temple and placed in their respective chariots, kept near the Singhadwar. The deities are carried to the chariots in a traditional ceremonial manner-first Sudarshana, followed by Balabhadra, Subhadra and Jagannath. Balabhadra and Jagannath are made to swing forward and backward in a manner called ‘Pahandi’.

On the first day if any chariot cannot reach the Gundicha Ghar, it is dragged on the next day. On the ninth day i.e. the Return Car Festival day, the deities are brought to the Singhadwar area of the Jagannath Temple. An important ritual performed, on the 5th day (starting from and including the day of Car Festival) is known as ‘Hera Panchami’, when goddess Laxmi proceeds to Gundicha Ghar to see Lord Jagannath. In the evening of the lOth day (i.e. the 11th day of the bright fortnight of Asadha) the deities are adorned with gold ornaments and dressed gorgeously in their respective chatiots parked in the Simhadwar area. On the same day another ritual called ‘Hari Sayan Ekadasi’ is performed. On the following day i.e. the 12th day of the bright fortnight, important ceremony known as’ Adharapana Bhog’ is performed. A sweet drink is offered to the deities. On the evening of the following day, the deities are taken to the temple in a traditional procession amidst gathering of thousands of devotees.